The Lost Continent of Malzthurdän - a Gygax '75 Challenge campaign setting, Part 3 - The Dungeon

Week 3 turned out to be quite a challenge, and frankly I still have some work to do.  When ever I thought of running a campaign before, I always planned on using published material, particularly when it comes to dungeon.  In my mind, there is so much great material that I already own I should probably just use that and adapt it to my campaign. A modified Caverns of Thracia would be perfect for this, but the challenge asked for a new dungeon.  So this ends up being the first dungeon I've created in over 30 years! Crazy stuff huh?
This is the dungeon located at 12 on the area map. It is a tomb built into the side of a mountain at the end of the ruined city. Most everything in the ruins has been picked clean but the tomb itself is fairly intact. The entrance is an ancient stone gatehouse, now covered in vegetation, and set of double doors leading to the tomb itself.  The tomb is the resting place of a great king from a lost human empire on this continent (yes king, not emperor, I'm going with a Westeros Seven Kingdoms sort of thing here).  The first level is centered on a shrine, and is dedicated to religious worship for the deities of the Empire.  The second level is dedicated to the history of the kingdom.  The third level contains the actual resting place of the king and was dedicated to his life and the history of his family. The King's ghost still haunts the halls.  The Ophidians and Lizardfolk are aware of this and stay away from the tomb generally.  However, a tribe of kobolds have recently moved into the area, and their shaman has trapped the ghost in a binding circle.
Wandering monster table for use on all 3 levels: 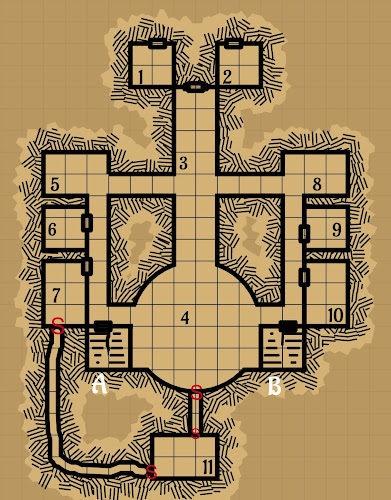 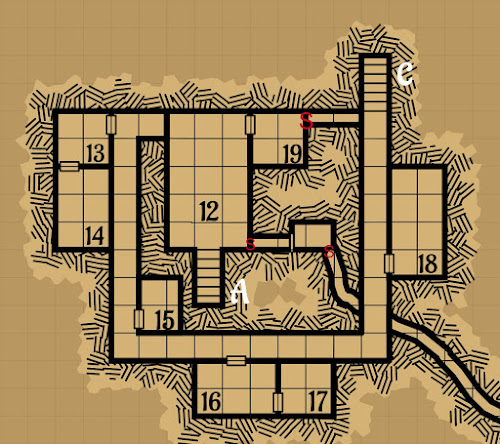 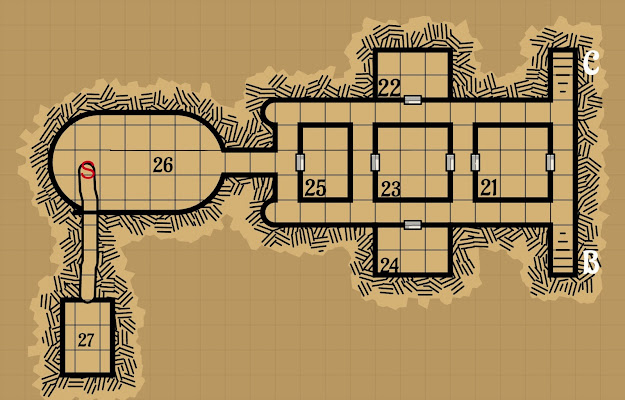 Level 3
50% chance that any wandering monster encountered in the halls here will instead be a Gelatinous Cube.Other than 26 and 27, these rooms have be thoroughly converted by the kobolds, and their original purpose is unclear.
21. Guard room - 6 kobolds
22. Living quarters - 8 kobolds. 50% chance of being asleep
23. Chief's room - Kobold Chief and 5 female attendants. 50% chance Chief is asleep. Wields a magic mace.
24. Living quarters - 6 kobolds. 50% chance of being asleep
25. Shaman's room - Kobold Shaman and 2 guards. 50% chance Shaman is asleep.
26. King's tomb - Angry ghost (treat as spectre) bound in circle in middle of the room. If released will attack kobolds. (just break the circle) Nothing of value in sarcophagus, but secret trap door in bottom. Ghost will tell party of secret door and 27 if given magic shield (17) and mace (23).
27. King's true resting place - Actual remains an Crown worth 10k GP. Returning it to rightful heirs will put king to rest.
Posted by Brendan at 1:25 PM